You are here: Home / Family / IVF: Our Story Of Loss And Hope (Part 5)
Well, I hope I didn’t drop a shocker on you and then run last time. If you haven’t read our story from the beginning be sure to check them all out here:
Part 1
Part 2
Part 3
Part 4
Again, I feel so blessed by the outpouring of love and support from my followers and even some of my new followers. Thank you, thank you for sharing your own stories and for your continuous prayers as we continue on our IVF journey. 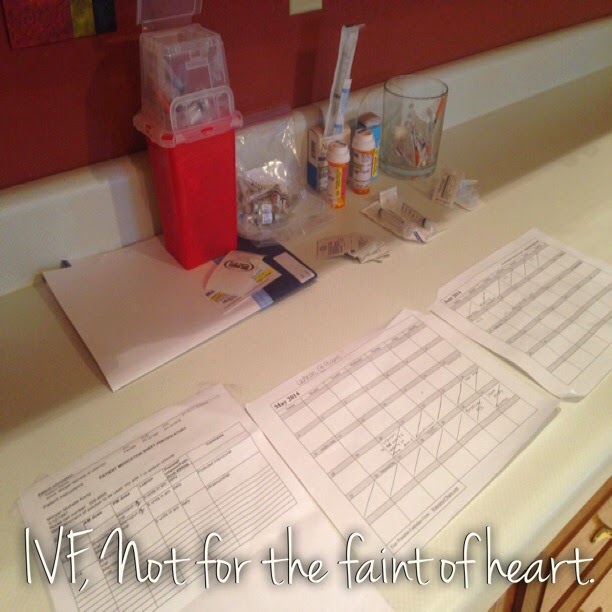 Now, that IVF journey. It isn’t easy not even a little bit. I know we both talked about how it wasn’t going to be easy. And we had a lot of long talks about it. The plan for Elliette especially when I had the really bad days. No matter what, we wanted to keep her life as consistent as possible.
And we have. On the days where she can’t be with me because I am so sick to my stomach or I have been told to rest, rest, and then rest some more she has spent time with her Daddy on the farm, or Grandma’s house, or our babysitter. On the Sundays when I just didn’t feel good enough to make it to church Jason packed her up and took her to church.

I wasn’t lying when I said that my body is tied to a schedule. A really, really tight one. Down to the minute it seems. I have to give shots at the same time each day and give a different shot at the exact time so I don’t mess up the process for the doctors. But, I made it through the shot part, or the big shot part, I should say.
Barely.
I think I only cried once in pain. But, more than once in not being able to be a “good mommy”. And I was so sick to my stomach that I don’t even think my hubby got to see a real mood swing in me.
We went with the recommended course from our doctor. Which is what they call a ‘Frozen Embryo Transfer’. Which means that they take out my eggs, they fertilize them, and then they freeze the embryos to put in at a later time. We did this because at the doctor’s recommendation we sent them off to a genetics lab for our chromosomes to be analyzed and see if there was a genetic anomaly that we didn’t know about.
It started with a pack of birth control (a bit ironic, right?). Then it was one shot a day. Then it was three shots a day. And then it was one really, really big shot that was a trigger shot that was given at
7 P.M.- 36 hours before the egg retrieval.
All the shots essentially made me produce as many eggs as I can and make my uterine wall nice and thick. Then that really, really big shot called the trigger shot- triggers me to ovulate. Then 36 hours later the doctor performs an egg retrieval.
I was nervous, I won’t lie. I always get really sick after procedures and surgeries. But, the last thing I remember was a puff of something smelling weird and then waking up feeling….a whole lot better than I thought I would! My blood pressure was really, really low. So, I had to hang out for a little longer than we thought. But, before we knew it we were home and I was happily asleep.
Then before I knew it I was sicker than sick. I guess I wished a little too much to feel good after being put to sleep. And I mean so sick to my stomach, and puking. And the cramping.
It was safe to say that the IV medicine had worn off.
I am a week past the procedure and I am still pretty sick to my stomach, and the cramping has gotten better, but not nearly gone away quite yet. I hate being sick to my stomach. It has to be one of the worst things in the world. It makes me crabby and so miserable.
But, during that week we have gotten some good news. The day of the retrieval they were able to retrieve 14 eggs! Which is the perfect number. The next day 13 eggs were fertilized. And now on Day 6, we have 7 embryos that are still viable. Which is a true blessing. I would have been devastated, to say the least, if I went through the entire process and they didn’t get enough eggs.
It’s amazing how quickly those numbers can diminish, but now it’s time for them to be sent off to be analyzed genetically. And once we get those results here in a few weeks, we will start things all over again, a little differently, but starting again, nonetheless. And we will start praying for a safe embryo transfer.
An embryo transfer means that they will be putting a fertilized egg back inside my uterus. And, because I know I will get asked, we aren’t sure how many fertilized eggs we are putting back in. It’s a really, really big decision. One that will take a lot of prayers for our family.
It’s hard to believe what we have gone through the last month and on a date night a few nights ago my husband mentioned something about someone asking him if we will do it again if we don’t get pregnant. And he said he wasn’t sure, because it was really, really hard on me.
And that’s true it has been really, really hard on not only me, but also for Jason. He has had to pick up my slack in all areas and really pull double duty with Elliette. He has been a rock and I know he is tired and ready to have his completely busy, in control of life, wife back. And I hope to get there soon.
So, I don’t know if we will do it again if this IVF cycle fails. But, I know we are meant to be parents, that I know is true in my heart. And if that means only with Elliette then that is okay. But, we haven’t closed the book yet. And we can’t make decisions when we don’t know what the future entails. But, not only is this our IVF journey, but it’s also our story of our hope of becoming parents again. Either through IVF or through adoption. Which is a whole new journey we have began, but put on hold for our IVF cycle. It’s exciting the opportunities we have in our life. And the many blessings we have encountered along the way.
Continue On To Part 6